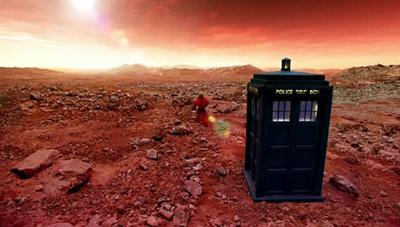 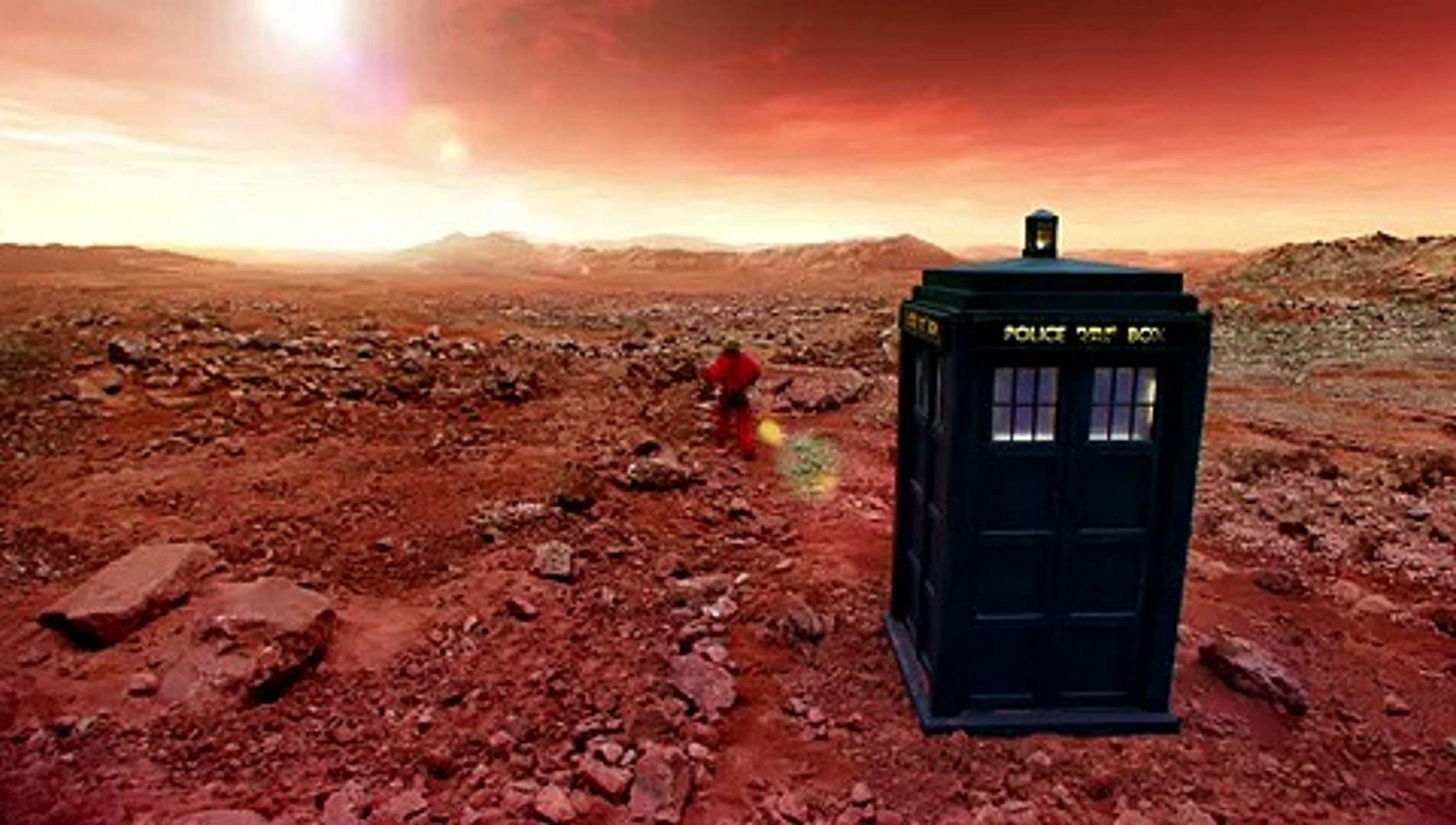 The Doctor lands his TARDIS on Mars in 2059; while wandering the landscape, he comes across "Bowie Base One", humans' first colony on the planet. He is detained by its crew, led by Captain Adelaide Brooke. The Doctor learns the current date, and recalls that on this date, the base was destroyed by a nuclear blast with no survivors; the event would cause humanity, including Adelaide's descendants, to further explore the universe and meet interstellar lifeforms, and thus is considered an event "fixed in time". He reluctantly becomes involved in the base's problems when Adelaide cannot communicate with crew members in the remote bio-dome.
In the bio-dome, they find the two crew members: they have become infected by a water-borne virus that causes their bodies to generate copious amounts of water. The virus is intelligent; it attempts to infect the others through the already-affected crew. One of the infected people is put into quarantine; Adelaide and the Doctor return to central control and the base is sealed. Studying the infected crewmember, the Doctor and Adelaide learn that the virus desires to go to the water-rich Earth, an event they cannot allow to happen. While inspecting the glacier that is the source of the base's water, the Doctor surmises that the virus was placed there eons ago by the Ice Warriors. Adelaide discovers that one of the filters was not properly fitted, which allowed the virus to enter the bio-dome's water supply. Adelaide realizes that the rest of crew has yet to be exposed to the tainted water, and orders them to prepare to return to Earth via rocket. The Doctor dons his spacesuit and leaves for the TARDIS, but Adelaide stops him and demands he reveal what he knows; the Doctor sadly explains the fate of the base and its crew.
As the Doctor walks back towards the TARDIS, he hears over his headset the infected beings breach central control; others, including their pilot Ed, become infected. Ed destroys the rocket to strand the virus on Mars. As Adelaide and her last two remaining crew, Yuri and Mia, become trapped by the water, the Doctor returns to the base, delays the advance of the infected crew, and, as Adelaide initiates the base's auto-destruct sequence, uses the exploration robot GADGET to bring the TARDIS to the base in time to evacuate it before self-destruct.
The TARDIS materialises on Earth outside Adelaide's home. Yuri tends to an emotionally distraught Mia while Adelaide asks the Doctor why he saved them. He explains that before, such actions were prohibited by the Time Lords, but now as the last Time Lord, he can use his power to ensure the survival of pivotal figures such as Adelaide in addition to the "little people" he has rescued previously. Adelaide angrily asks, "Little people? What, like Mia and Yuri? Who decides they're so unimportant - you?" The Doctor takes a harsher tone as he references the Time War: "For a long time now, I thought I was just a survivor, but I'm not; I'm the winner...the Time Lord Victorious." Visibly alarmed, Adelaide responds, "the Time Lord Victorious is wrong"; she leaves the Doctor and enters her home, where she kills herself just after closing the door behind her.
The Doctor recoils in shock as he realizes that Adelaide has ensured that history be unchanged, save for Yuri and Mia as witnesses to the fate of Bowie Base One. The Doctor is overcome with emotion as Adelaide's words echo in his mind. Ood Sigma appears in the street. Visibly shaken, the Doctor sees this as a message and says, "I've gone too far." He then asks whether it is time for him to die. Unresponsive, Sigma vanishes, and the Doctor staggers back into the TARDIS to the ominous sound of the Cloister Bell. With a defiant "No!" he begins to operate the controls.