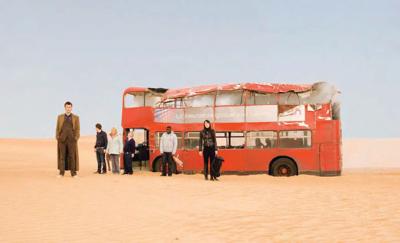 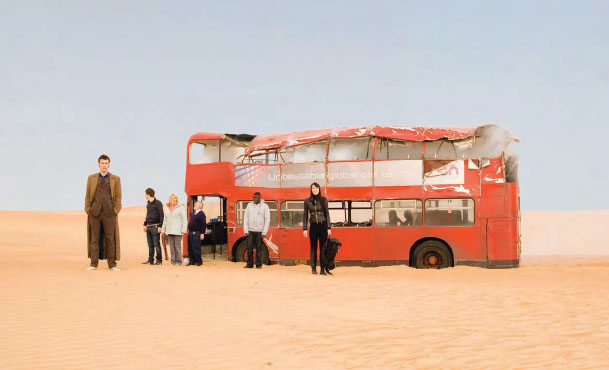 A young thrill-seeking burglar, Lady Christina de Souza (Ryan), steals a gold chalice once belonging to King ?thelstan from a London museum and narrowly evades the police by hopping on a 200 bus. The Doctor (Tennant), who is tracking down a wormhole, joins her shortly before the bus suddenly passes through the wormhole and arrives on the desert planet of San Helios. The Doctor and the other passengers find that the wormhole is still present, but returning on foot is impossible after the bus driver is killed trying to cross back; the passengers deduce that the bus protected them like a Faraday cage. Seeing the driver's skeleton coming out on the other side of the portal, the police call in UNIT, commanded by Captain Erisa Magambo (Dumezweni) and aided by scientific adviser Malcolm Taylor (Evans). The Doctor manages to contact UNIT on his mobile phone and builds a rapport with Malcolm, who impresses him with his understanding of the wormhole.
The Doctor and Christina quickly get to know the handful of other passengers on the bus: Angela (Victoria Alcock), Barclay (Daniel Kaluuya), Nathan (David Ames), Lou (Reginald Tsiboe) and Carmen (Ellen Thomas) who has low-level psychic abilities. The Doctor and Christina decide to scout the planet, spotting an approaching storm, while Nathan and Barclay try to fix the bus. The Doctor and Christina encounter a couple of Tritovores, a species resembling anthropomorphic flies, who take them to their wrecked spaceship.
The Tritovores explain that they were making a routine goods collection with San Helios when they crashed, and that the planet very recently housed a hundred billion inhabitants and a thriving ecosystem. The Tritovores send out a probe to investigate the cause, and discover a large swarm of metallic stingray-like aliens who routinely create wormholes to travel between planets, destroying their ecospheres as their biological imperative. The Doctor suspects that Earth may be the stingrays' next target due to the wormhole they passed through before, and makes to hasten their return to Earth. Captain Magambo, who has also worked out that the earth is threatened, orders Malcolm to close the wormhole but he refuses even at gunpoint to sacrifice the Doctor.
Christina uses her burglary skills to retrieve a crystal which powers the spaceship, together with the pedestal it is located on. This awakens the stingrays that had caused the ship to crash in the first place, costing the life of the two Tritovores. The Doctor attaches parts of the pedestal to the bus and uses the chalice of Athelstan as an interface to the technology. This allows the bus to fly through the wormhole, with the stingrays in hot pursuit. Taylor closes the wormhole but not before three of the stingrays pass through it. After UNIT shoots down the stingrays and the passengers have been debriefed, Christina pleads with the Doctor to let her travel with him, but he coldly rejects her because he has no wish to lose another companion.
The characters part ways again. The Doctor recommends that UNIT hire Barclay and Nathan. Christina is arrested by the police for the theft and Carmen has a premonition that visibly unnerves the Doctor:
You be careful, because your song is ending, sir. It is returning, it is returning through the dark. And then Doctor... oh, but then...he will knock four times.

As a final act of kindness, the Doctor uses his sonic screwdriver to release Christina from her handcuffs, allowing her to escape. The pair part on good terms as she flies away in the bus and the Doctor leaves in his TARDIS.