< Serpent Crest - 4. The Hexford Invasion
The Thing From The Sea > 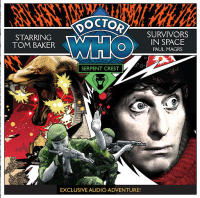 Tom Baker stars as the Fourth Doctor in the fifth of five thrilling brand new adventures, with Susan Jameson as Mrs Wibbsey, Richard Franklin as Mike Yates, and David Troughton as the Visitor.

It has been three months since the Hexford catastrophe, and Mike Yates is trying to show strength of leadership to the villagers. But with morale low and supplies running out, it is increasingly difficult to keep his own hopes up. Unless somebody finds them soon, the future looks bleak.

So when the TARDIS materialises on the village green, it seems that help has arrived at last. But with two Doctors apparently at large, there is still the small matter of what was buried under Nest Cottage - not to mention who is clamouring to break through the protective force field. Soon Hexford is under siege once again, and this time an ancient hunger will be sated. Time has run out for the keepers of the Skishtari egg?

BOOK DEPOSITORY
PENGUIN
*Amazon and Book Depository affiliate link purchases help fund continued development of TheTimesScales website. So if you make a purchase using these Amazon or Book Depository links, thank you for your support!
Reviews
My Rating/Review
Log in to submit Rating and Review.