The Chains of Olympus 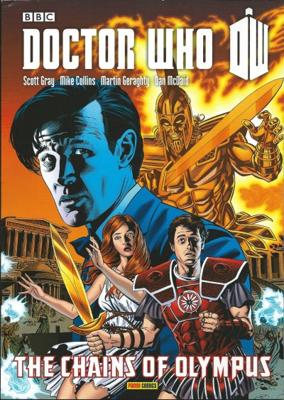 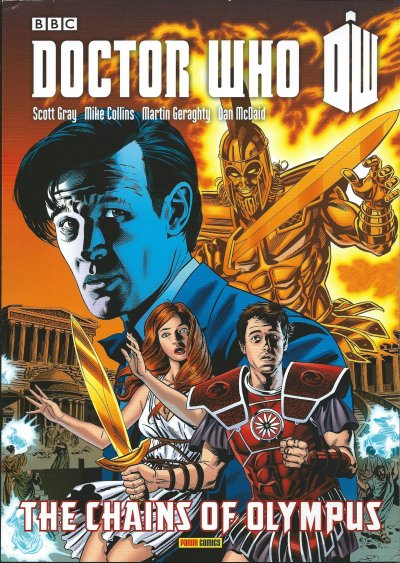 The Chains of Olympus was the sixteenth volume of the Panini Publishing series of Doctor Who Magazine comic collections, and the second collection to feature the Eleventh Doctor.

It was the first chance readers had of seeing the original version of the comics since they were first published in DWM in 2011 and 2012.

Join the Doctor, Amy Pond and Rory Williams on their amazing adventures in space and time, in these exceptional collected comics from the pages of Doctor Who Magazine!

The Chains of Olympus
Sticks & Stones
The Cornucopia Caper
The Doctor, Amy and Rory travel back to Ancient Greece and encounter the Doctor's greatest hero: Socrates! But Athens faces deadly danger creatures from myth stalk the streets, and the wrath of the gods may destroy mankind! The action continues in modern-day London and the spaceport called Cornucopia as the time-travellers encounter a sinister artist with a lethal name, a society of vicious alien criminals and the greatest thief in the galaxy!

PLUS! A bumper commentary section where the writers, artists and editors reveal the stories behind the strips! featuring never-before-published artwork, original story outlines and much more!

An essential collection for fans of Doctor Who and classic British comics!

Plot
8.0
(1)
Acting
NR
(?)
Effects
9.0
(1)
Replay
8.0
(1)
11th Doctor
Doctor Who Magazine ~ 11th Doctor Comics
Amy Pond
Rory Williams
Doctor Who Magazine ~ 11th Doctor Comics
8.0
Supernature
?
Planet Bollywood
?
The Golden Ones
?
The Professor, The Queen and the Bookshop
?
The Screams of Death
?
Do Not Go Gently into That Good Night
?
Forever Dreaming
?
Apotheosis
?
The Child of Time
?
The Child of Time ~ Panini Anthology
8.0
The Chains of Olympus
7.0
Sticks & Stones
8.0
The Cornucopia Caper
?
The Broken Man
?
Imaginary Enemies
10.0
Hunters of the Burning Stone
10.0
Hunters of the Burning Stone / Panini
?
A Wing and a Prayer
?
Welcome to Tickle Town
?
John Smith and the Common Men
?
Pay the Piper
?
Sweet Sorrow (Pay the Piper Part 2)
?
The Blood of Azrael
?
The Crystal Throne
8.5
Boxset Average Rating
Writer:
Scott Gray