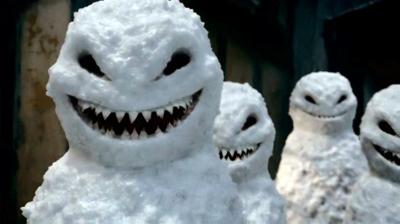 In 1842 England, a young boy builds a snowman but refuses to play with the other children. The snowman starts speaking to the boy, repeating his assertions that the other children are "silly". Fifty years later, the boy has grown up to be Dr Simeon, proprietor of "The Great Intelligence Institute". He hires men to collect samples of snow, which he places in a large snow-filled globe in his laboratory before feeding the men to a group of animated snowmen. Meanwhile, the Doctor, still despondent after losing his former companions Amy Pond and Rory Williams, has parked his TARDIS above Victorian London among the clouds, descending to the surface via a long circular staircase, and instructed his allies ,Vastra, Jenny, and Strax, to scout the city, through which he learns of Dr Simeon's interest in the snow.

Elsewhere, Clara, a barmaid, investigates a disturbance outside her tavern to find the Doctor walking by. She accuses him of building a snowman, but the Doctor realises that the snowman is made of snow with a memory. The Doctor attempts to leave discreetly, but Clara follows him to a coach. The Doctor, hesitant about gaining a new companion, instructs Strax to bring a "memory worm", with the intent to use the creature's touch to wipe away the last hour of Clara's memory. More snowmen form and surround them, and the Doctor tells Clara that her thoughts are creating the snowmen and instructs her to think of them melting; after she concentrates, the snowmen melt. Clara cautions the Doctor that if he wipes her memory, she will forget how to deal with the snowmen. The Doctor reluctantly allows her to go and returns to the TARDIS. Clara follows and knocks, but hides and flees down the staircase when the Doctor answers. Clara returns to her other job as governess for the children of Captain Latimer. She learns that Latimer's daughter has been having horrible dreams about the old governess - who had been frozen a year prior in Latimer's pond - returning from the dead and killing them all. Clara attempts to contact the Doctor but instead attracts the attention of Jenny, who takes her to see Vastra. Vastra tells Clara she gets only one word to impress the Doctor with if she wants his help; she chooses "Pond", which arouses the Doctor's interest.

The Doctor visits Dr Simeon's laboratory, posing as Sherlock Holmes, and finds that the giant snow-filled globe contains the Great Intelligence, the entity that has been speaking to Dr Simeon since childhood. He learns that the Great Intelligence has been controlling the snowmen and has taken interest in Latimer's pond, which contains the DNA to create a new snow creature. The Doctor visits the pond, from which an ice creature in the form of the former governess rises and enters the mansion. Vastra, Jenny and Strax arrive and trap the creature. The Doctor flees with Clara to the roof of the mansion followed by the ice creature. They ascend to the TARDIS, where the Doctor gives her a key after she mentions soufflés, explaining that he considers her a companion but does not understand why. However, the ice creature grabs Clara and pulls her over the edge of the clouds. The Doctor picks her up and returns to the mansion, placing her under medical care of Strax. He collects the ice fragments from the governess, ensuring they remain dormant but finding they contain ice-based DNA, the material that the Great Intelligence is looking for, and apparently places them in a souvenir London Underground biscuit tin. He and Vastra travel to Simeon's lab, where the Doctor notes the Intelligence's plan to replace humanity with ice creatures and holds up the tin with the necessary DNA. Dr Simeon grabs the tin, finds that it contains the memory worm, which bites him. The Doctor states that the Great Intelligence, which has been existing as a mirror of Dr Simeon's thoughts, will vanish with the erasure of Simeon's memories. Instead, the Intelligence reveals that it existed long enough that it can now control Simeon's body, which it uses to attack Vastra and the Doctor. However, the influence of the Great Intelligence quickly wanes, and Simeon falls dead. Outside, a salt-water rain has started, and the Doctor realises that another, more powerful psychic ability has taken control of the snow from the Great Intelligence: the Latimer family, crying for Clara. Strax informs the Doctor upon his return to the Latimer mansion that Clara only has moments left, and she passes away as the Doctor returns the TARDIS key to her. At her funeral, the Doctor reads Clara's full name, Clara Oswin Oswald, on her tombstone and realises she is the woman he met in "Asylum of the Daleks" who became a Dalek. He gleefully announces that a person dying twice is an impossibility and, bidding farewell to his allies for now, the Doctor departs in the TARDIS to investigate and find Clara. Meanwhile, in contemporary times, a young woman resembling Clara walks through the same graveyard, pausing by Clara's tombstone.

( Affiliate Link )
*Amazon and Book Depository affiliate link purchases help fund continued development of TheTimesScales website. So if you make a purchase using these Amazon or Book Depository links, thank you for your support!
Reviews
My Rating/Review
Log in to submit Rating and Review.