< The King of Terror
Bunker Soldiers > 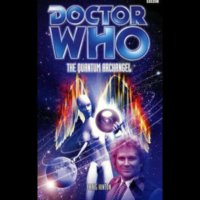 "Hear me, Lord of Time. We are a vengeful people. Our reach is infinite and our patience eternal. For your actions, we will have vengeance. And the vengeance of the Chronovores is terror beyond imagining."

Five thousand years ago, the Priest-Kings of Atlantis attempted to enslave Kronos, greatest of the Chronivores. They failed, with catastrophic results. Thirty years ago, the Master sought to do the same, and barely escaped with his life.

London, 2003: torn apart by tragedy, the Doctor and Mel have gone their separate ways, only to find their paths crossing once more. While the Doctor tries to stop an old friend from making a terrible mistake, Mel is horrified to learn that her best friend has fallen under the influence of the Master.

As the Master desperately tries to defend himself against the power of Kronos, the Doctor and Mel must overcome their differences. If they don’t, the Quantum Archangel will be triumphant. And if she is, nothing in the Universe will ever be the same again.