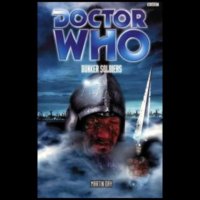 There are many beasts and monsters in the universe, it is true. But the worst of them is Man.

A terrifying alien army is sweeping across the landscape, decimating towns and subjugating everyone and everything in its path. With their astute military tactics and advanced weaponry, the invaders seem unstoppable.

But this is no distant star, no alternate timeline. Trapped in a frightened city, the Doctor and his companions discover that this is Earth history, and they are powerless to intervene. The impending slaughter of thousands is a matter of grim historical fact.

Not everyone within the city is prepared to accept their fate. Desperate people embark upon desperate courses of action. They may even succeed.

For, deep beneath the city, something truly alien is stirring...