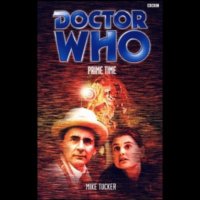 Coming up after the break, the start of a new series of programmes featuring the mysterious traveller in Time and Space known only as — the Doctor.

Detecting a mysterious sub-space signal in the Time Vortex, the Doctor and Ace land on the planet Blinni-Gaar. They soon discover that the native population are little more than zombies, addicted to the programmes of the dangerously powerful Channel 400. As the Doctor investigates, he finds that the television company has a sinister agenda that has nothing to do with entertainment.

Why is the Director-General of Channel 400 so interested in the Doctor? Who are the mysterious aliens who watch from the shadows of the Brago nebula? And why is a pack of Zzinbriizi jackals stalking the streets of Blinni-Gaar?

As the Doctor is drawn deeper and deeper into a web of intrigue and deceit he discovers that he has an unexpected ally — of the most dangerous kind.