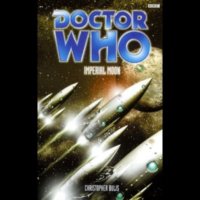 The year is 1878. Three ships of the British Imperial Spacefleet have just set course for the Moon.

The discovery of a mysterious diary, recalling a seemingly impossible journey, takes the Fifth Doctor and his companions back to a crucial moment in history — and into certain danger. For the moon of 1878 is far from deserted.

Trapped in a crater teeming with hostile animal and plant life, the Doctor and Turlough must join the British explorers on a hazardous journey to battle for their freedom before the long lunar night descends. For, lurking in the shadows, are the Vrall — cunning and utterly ruthless killers.

With the loss of one of their ships — and their captain — the British team become embroiled in a struggle to survive that tests duty and honour to their limits. Meanwhile, Turlough finds himself with time in his hands and the Doctor must make a choice that will determine the future of an empire — and Earth itself.