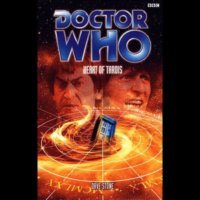 In the American Midwestern town of Lychburg, something is afoot. Its citizens are being killed in inexpressibly horrible and brutal ways and the police don't have a clue who's responsible. The only suspects are a mysterious and sinister stranger, who calls himself the Doctor, and his young companions Jamie and Victoria.

The Fourth Doctor and Romana, meanwhile, have been summoned by the Gallifreyan High Council. A force has been unleashed into the space/time continuum... a force so unimaginably terrible that it is set to rip the universe itself apart and plunge it into primal, screaming chaos from which nothing will survive.

Of course, since something of this nature happens every other day of the week, the Doctor's really far more interested in finding out what's happened to a close personal friend, who seems to have vanished under mysterious circumstances. And quite right, too. The fate of a universe plunging into foetid and unending chaos can look out for itself for a change.