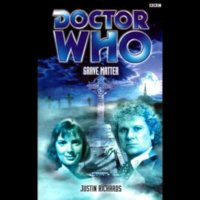 Dorsill: a group of islands shrouded in fog, the community facing economic ruin and struggling to survive.

When Christopher Sheldon buys the islands outright, the locals owe him a debt of thanks. They don't ask too many questions about what Sheldon and his friends are up to; they don't care that he seldom ventures into the one small village; they don't ask why he saw fit to spend such a large amount of money — or where he got it from...

Even when the first few people die, there's an assumption that it's down to natural causes: allergic reactions, an especially virulent strain of flu, a tragic fishing accident... And if the sheep and chickens are behaving oddly, that's hardly a worry.

No, if there's anything to arouse suspicion, it's the arrival of retired civil servant Sir Edward Baddesley. But generally life goes on, with its little triumphs and upsetting tragedies.

Until the two strangers arrive...