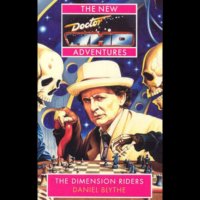 "Someone here has been playing with time, Ace. Like playing with fire, only worse - you get burnt before you've lit the match."

Abandoning a holiday in Oxford, the Doctor travels to Space Station Q4, where something is seriously wrong. Ghostly soldiers from the future watch from the shadows among the dead. Soon, the Doctor is trapped in the past, Ace is fighting for her life, and Bernice is uncovering deceit among the college cloisters.

What is the connection with a beautiful assassin in a black sports car? How can the Doctor's time machine be in Oxford when it is on board the space station? And what secrets are held by the library of the invaded TARDIS?

The Doctor quickly discovers he is facing another time-shattering enigma: a creature which he thought he had destroyed, and which it seems he is powerless to stop.