< The Tenth Planet
The Highlanders >

The Power of the Daleks 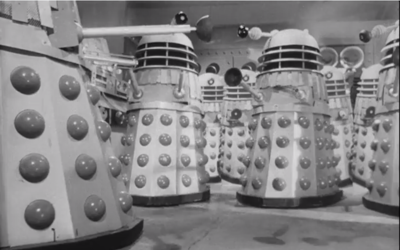 The TARDIS brings the new Doctor, Polly and Ben to the Earth colony planet Vulcan. The Doctor witnesses a murder and, investigating the body, discovers a pass badge allowing him unrestricted access to the colony.

The dead man was an Earth Examiner who had been secretly summoned by Deputy Governor Quinn to investigate the activities of a group of rebels - a problem regarded as insignificant by Governor Hensell.

A scientist, Lesterson, has meanwhile discovered a crashed space capsule containing inert Daleks, which he is now in the process of reactivating. The Doctor's warnings are ignored when the Daleks claim to be the colonists' servants.

As the rebels grow in strength, their operations covertly led by Head of Security Bragen, the Daleks take advantage of the colonists' naive trust to establish a reproduction plant - on a conveyor belt system - with which to increase their numbers. The Doctor eventually destroys the Daleks by turning the colony's power source against them.

The defeat of the Daleks, to whom Bragen and the rebels had allied themselves, gives Quinn an opportunity to re-establish control, Hensell having previously been killed. The Doctor and his friends slip back to the TARDIS.