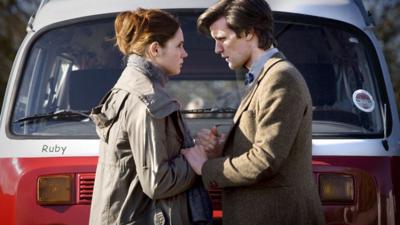 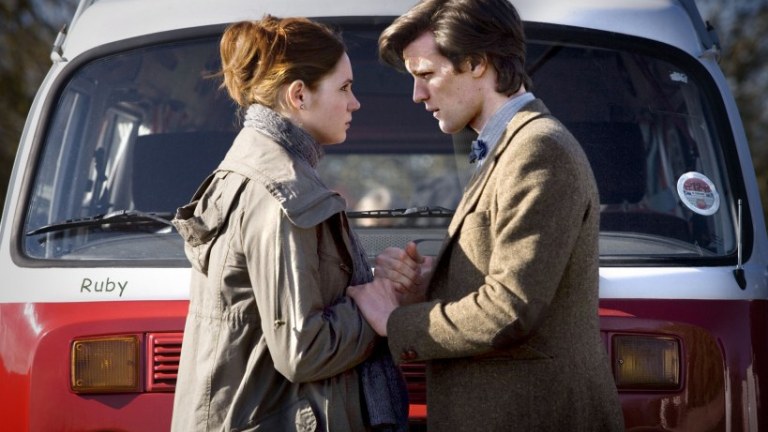 The Doctor, Amy, and Rory find themselves flickering between two realities, falling asleep at the sound of birdsong in one and waking in the other. In one, Amy and Rory stopped travelling with the Doctor five years previously; they are happily married and Amy is heavily pregnant. They find themselves in their hometown of Leadworth, chased by the Eknodine, an alien race that have disguised themselves as the elderly of the town and who are able to turn anyone else into dust by blowing a poisonous liquid on them. In the other, they are trapped in the powerless TARDIS floating towards a freezing cold star which will kill them shortly. During one of their experiences in the TARDIS-reality, they are met by the "Dream Lord", who tells them that he created this trial, which they can only escape from by being killed in the false reality; death in the true reality will be permanent.
Eventually, the Dream Lord keeps Amy awake in the TARDIS-reality while the Doctor and Rory fall asleep and return to the Leadworth-reality. The Dream Lord questions Amy as to whom she would choose between Rory and the Doctor; he states that she should choose between the worlds, because one leads to a peaceful married life with Rory while the other leads to adventure and excitement with the Doctor. Amy returns to Leadworth, and joins Rory defending her house from the Eknodine, whilst the doctor is trying to rescue people from Leadsworth in a caravan and comes to join them later. As Amy believes she is going into labour, Rory is sprayed by the Eknodine and turns to dust. Amy decides that she is willing to risk her own life for the chance of seeing Rory again and concludes the Leadworth-reality is false; she and the Doctor drive a caravan into the house, leading to their assumed deaths. The three wake up again on the TARDIS where they are congratulated by the Dream Lord, who then reactivates the TARDIS. After the Dream Lord's departure, Amy and Rory are surprised by the Doctor when he directs the TARDIS to self-destruct, apparently killing them all.
The three wake up again on the TARDIS, no longer in any danger. The Doctor realises both realities were false since the Dream Lord had power in both and was a manifestation of his darker side. The three were influenced by psychic pollen that had fallen in the TARDIS, creating the Dream Lord and the false realities. As Amy and Rory reconfess their love for each other, the Doctor privately worries about the reappearance of the Dream Lord in his future.