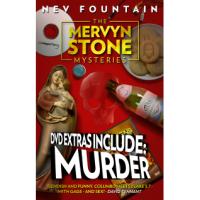 Mervyn Stone was once the script-editor of an old BBC television series which gripped the nation in the 1980s; a sexy space saga featuring large-breasted women and even larger-breasted men.

Vixens from the Void is the reason why Mervyn's career, though dead, still has spasms of life, like the odd twitch on a cooling corpse.

It's the reason why Mervyn is invited to take part in a DVD commentary discussing one of the more controversial (and, let's face it, blasphemous) episodes of Vixens from the Void.

And it's the reason why Mervyn has to become an amateur detective. Again.

During the commentary, one of the participants is poisoned by a bottle of water randomly taken from a table. No one knows how the poison got into the bottle. The bottles were sealed. No other bottles contained poison. An impossible crime. The victim was a high profile atheist, who made a career out of enraging Christian groups with his provocative books and interviews. The whispers begin: 'Act of God'?

As the bodies pile up and he's pursued by crazed fans, mad actresses, suspicious policemen and mental fundamentalists, Mervyn is starting to feel like God's got it in for him too…