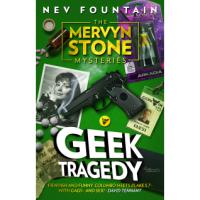 Mervyn Stone does not look like a special man. His nose is too big, his hair is always on the point of open rebellion, and he appears to have put his clothes on in the dark. He looks like a hedge which has been dragged through a man backwards.

Mervyn was script editor of the BBC television series Vixens from the Void, a ‘Dynasty in Space’ soap opera which gripped the nation in the 1980s; an intergalactic, glitter-themed, shoulder-padded bitchfest featuring wobbly spaceships, wobblier women and the wobbliest performances ever.

Mervyn is never allowed to forget his guilty past. The fans won't let him. This is why, twenty years later, Mervyn reluctantly finds himself at 'ConVix 15', a Science Fiction convention.

It’s a funny thing; it seems everywhere Mervyn’s dormant career takes him, there are murders.

Here's another funny thing. Mervyn, with his script editor's eye for sorting out plot-holes in stories, seems to be the only one able to solve them. If only he'd taken that job on Bergerac...