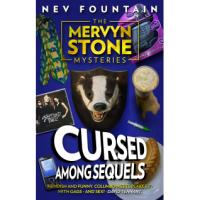 It's the announcement all its fans have been waiting for!

After seventeen long years, they're bringing back the science-fiction TV series Vixens from the Void; an intergalactic story of Space Bitches which was as 80s as Hair Gel, Live Aid and the Brixton Riots.

So it's bright lights, good times and the high life for ex-script editor Mervyn Stone again!

Or so he thought…

The reason why he is stuck in a pub in the arse-end of the backside of Cornwall, with no decent television channels, no central heating and a badger in his bed eludes him at the moment. His breakfasts smell of burning flesh, and his underpants are starting to coagulate.

And to make matters worse, someone is trying to kill him.

Is it the incompetent director who hates Mervyn from way back? The mad fan who wants the relaunch stopped at all costs? The flaky ambitious star? The executive producer with 'issues'? The arrogant womanising actor? The writer pretending to be something he's not? The producer with a guilty secret?

Mervyn is learning something very important. Perhaps the past should stay in the past…