< Doctor Who at the BBC ~ Volume 2
Regenerations >

Doctor Who at the BBC ~ Volume 3 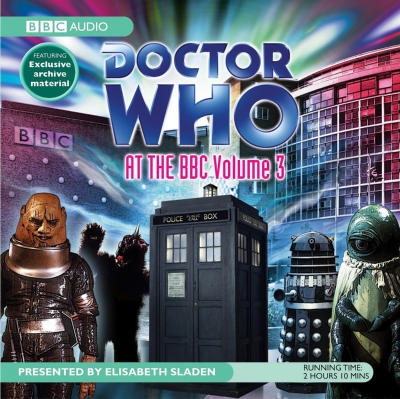 This release, narrated by Elizabeth Sladen, featured audio clips from TV and radio interviews and parodies of Doctor Who over the years, initially involving the original series, and later moving into the revival.

Elisabeth Sladen steps into the TARDIS once again to present another instalment of drama, comedy and behind-the-scenes extracts from the many worlds of Doctor Who

Doctor Who at the BBC combs the avenues of Time and Space for significant spin-off moments from the much-loved TV and radio series. In an exclusive coup, this third volume features a rarely heard ten minute mini-drama starring Jon Pertwee and Elisabeth Sladen. Specially recorded for Glorious Goodwood in 1974, it has never been broadcast and features a host of familiar enemies including the Daleks!

Elsewhere on this two-disk volume, the radio programme Wavelength meets the cast and production team of The Two Doctors; Nationwide investigates the work of the Radiophonics workshop in 1983; and a group of schoolchildren give their views on the series in Take Two from 1984. The Grumbleweeds enjoy their own exciting adventure in Dr Nobbut-Just; 'Ann Robinson' menaces the Doctor in Dead Ringers; and Jane Asher plays the Doctor's granddaughter in Whatever Happened to Susan Foreman?

Rare interview material includes Frank Bough's Nationwide encounter with fourth Doctor Tom Baker (plus Mary Tamm and Carole Ann Ford), Lalla Ward's appearance on Multi-coloured Swap Shop, and a mid-Eighties radio interview with Sarah Sutton. There are also features on the brand new Doctor Who, including comments from Russell T Davies and Christopher Eccleston, and even the seal of approval from Michael Grade...