Doctor Who - The Novel of the Film 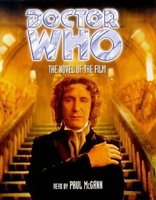 The Novel of the Film was a Gary Russell novelisation of the 1996 TV movie, Doctor Who. It was published in conjunction with the film's broadcast in the United States, Canada and Great Britain. Though for copyright purposes known as simply Doctor Who, the book has a cover which sends ambiguous signals about its title. On the front cover it is entitled Doctor Who, but on the spine, it is Doctor Who - The Novel of the Film.

The book was significant for a number of reasons. It was the premiere release of a Doctor Who novel by BBC Books, which would completely take over the Doctor Who publishing license from Virgin by late 1997. It was also the first novelisation not appearing under the Target or Virgin labels and the first novelisation to be completed before the filmed version was. Its tight publication schedule meant that Russell wrote it with, as he put it in his foreword, "precious little visual reference". For this reason, the novel contains, as Russell predicted, things which "differ from what we all see on screen". This is especially true of some of the descriptions of the minor characters.

The book is further significant for being one of the few Doctor Who adaptations to be in British shops well prior to the debut of its parent episode on BBC One.