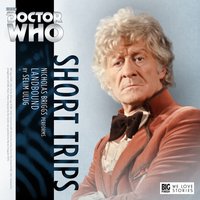 Doctor Who: Short Trips Monthly is a series of new short stories read by an original cast member. This special release is a Third Doctor story, and is offered as a free download via the Paul Spragg Short Trips Memorial Opportunity in 2017.

He was the captain of a ship once. Since being stripped of his authority, he is lost. Landbound. Then he meets a kindred spirit, a man who has also lost something.

In a small seaside town, both Ronald Henderson and the Doctor want to move forward, but one of them must first come to terms with his past...

Big Finish [Free]
*Amazon and Book Depository affiliate link purchases help fund continued development of TheTimesScales website. So if you make a purchase using these Amazon or Book Depository links, thank you for your support!
Reviews
My Rating/Review
Log in to submit Rating and Review.