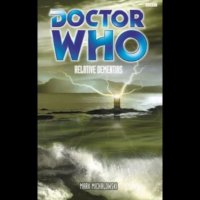 "Do Time Lords get Alzheimer's disease?" asked Ace. "Oh, we get far worse things than that, Ace. The dementias that plague us are much, much darker."

Collecting his post in the London of 2012, the Doctor and Ace are called through time to south-east Scotland to help out an old friend — an old friend who’s vanished. They find themselves at Graystairs, an Alzheimer’s treatment clinic and a place of healing, where the patients seem to be gaining a new lease of life. But whose life is it?

Why is the Doctor so reluctant to reveal what happened in the TARDIS before their arrival? Why are cats and dogs — not to mention people — disappearing? Who is the shadowy figure stalking the Doctor and Ace? And what is the secret of the mysterious Miss Chambers, whom no-one remembers meeting?

Soon, the Doctor and Ace find out the hard way that actions have consequences — and that there’s more than one kind of dementia.