< Dying in the Sun
Relative Dementias > 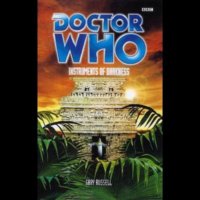 The Doctor and Mel arrive on Earth just days before New Year. An old friend has been kidnapped and taken to France. And two murderous enemies are setting up a new life in the Peak District. Which of these threats should the Doctor deal with first? And why is his old travelling companion Evelyn Smythe using her knowledge of the future to make a fortune from chocolate cake recipes?!