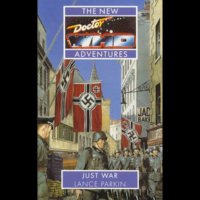 March 1941: Britain's darkest hour. The Nazis occupy British soil and British citizens are being deported to European concentration camps. Six thousand people a month are dying in air raids on London. The United States show no sign of entering the war.

According to the Seventh Doctor, this isn't a parallel universe, it isn't an alternate timeline; and everything is running according to schedule. But now something, somewhere, has gone wrong. The Nazis are building a secret weapon, one that will have a decisive effect on the outcome of the War. Chris thinks it's a UFO, while Roz believes that the Luftwaffe have developed the largest bomber ever built. Only Benny may have seen the mysterious craft — but she's disappeared off the face of the Earth.