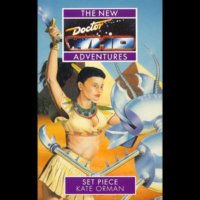 Dead. He was dead. How the hell was she supposed to do CPR on a man with two hearts?

There's a rip in the fabric of space and time. Passenger ships are disappearing from the interstellar traffic lanes. In an attempt to find out who's behind the disappearances, the Doctor and Ace allow themselves to be captured. But when Bernice's rescue attempt goes terribly wrong, the time travellers find themselves scattered throughout history.

Ace, stranded in Ancient Egypt, struggles to survive in an environment as alien as a distant planet: the Earth 3,000 years before she was born. She manages to find employment as a nobleman's bodyguard. And then she comes face to face with the metal horrors which have pursued her through time — the creatures she saw kill the Doctor.