< The Left-Handed Hummingbird
No Future > 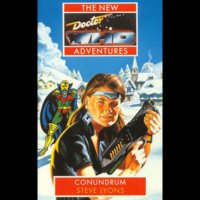 "Doctor, we're talking about an old man who used to dress up in a skintight white jump suit and fly around New York catching super-villains. Don't you think there's something just a bit unusual about that?"

A killer is stalking the streets of the village of Arandale. The victims are found one each day, drained of blood. And if that seems strange, it's nothing compared to the town's inhabitants.

The Seventh Doctor, Ace and Bernice think they're investigating a murder mystery. But it's all much more bizarre than that. And much more dangerous.

Someone has interfered with the Doctor's past again, and he's landed in a place he knows he once destroyed. This time there can be no escape.