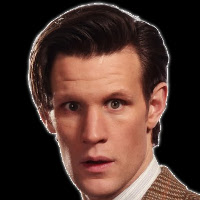 The episode starts immediately after the events of "The Bells of Saint John" with the Doctor in the TARDIS. He decides to learn more about this Clara's life and travels into her past. He observes her parents first meeting, a chance encounter caused by a gust of wind blowing a leaf into her father's face which led to him meeting her mother. The Doctor also observes the untimely death of Clara's mother and was present at her funeral. After the funeral he takes the TARDIS and collects Clara the morning after he left her. He asks her where she would like to go and she requests to be shown something awesome.

The Doctor takes Clara to the Rings of Akhaten. There they observe a series of planetoids orbiting a star, with a shining pyramid on one of them. The Doctor takes Clara to a giant alien marketplace and introduces her to several aliens, including a merchant named Dor'een who attempts to sell them a space bike rental. The Doctor explains that the market doesn't use hard currency but rather trades in items of sentimental value. Clara becomes separated from the Doctor and encounters a little girl who appears to be running and hiding. Clara catches up to her and she explains that her name is Merry Gejelh, and that she is the Queen of Years. Merry tells Clara that she is hiding because she is supposed to sing a song at a ceremony and she is afraid to get it wrong. Clara reassures her and Merry heads to the ceremony.

The Doctor and Clara attend the ceremony, where The Doctor explains that since the Rings were settled there has been a constant song sung to keep an angry god asleep. The people fear that the god, which they call Grandfather, will awaken and consume the entire universe if the song is ever interrupted. Merry begins singing, joined by a chorister at the pyramid. During the song, a mummy in a glass case at the pyramid begins to awaken. Merry panics, believing she made a mistake in the song. A beam of light from the pyramid envelopes her and she is pulled toward the pyramid and the mummy. The Doctor and Clara quickly find Dor'een and rent the space bike using Clara's mother's ring as payment. They ride the bike to the pyramid where they find the mummy struggling to escape the case and consume Merry's soul. The Doctor promises Merry that she doesn't have to sacrifice herself and that he will stop Grandfather. As the mummy begins to escape the case they all turn and see that the real creature is not the mummy but the star itself, which is home to a parasitic creature. As they attempt to leave a group of creatures called the Vigil arrive and attempt to force Merry to sacrifice herself. The Doctor stops them and has Clara and Merry return to the ceremony while he intends to face the planet sized creature.

The Doctor faces the creature and realizes it feeds off of memories, stories, and feelings. He tries to overfeed it by offering the sum total of his Time Lord memories. This by itself is not enough to sate the creature, and Clara returns to help. She offers the creature the leaf that blew into her father's face on the day he met her mother. The leaf contains an infinite amount of untold potential that Clara's mother never saw because she died early. The creature, overwhelmed by the infinite potential it has consumed, implodes on itself and the planet and the Rings are saved.

The Doctor returns Clara to her home on the same day they left and gives her back her mother's ring. He tells that all the creatures that she saved wanted her to have it back. Suddenly Clara remembers seeing The Doctor at her mother's funeral and asks why he was there. He tells her that she reminds him of someone who died, and she rebukes him for using her as a replacement. He assures her that he was not replacing his friend, and Clara sets off home.

( Affiliate Link )
*Amazon and Book Depository affiliate link purchases help fund continued development of TheTimesScales website. So if you make a purchase using these Amazon or Book Depository links, thank you for your support!
Reviews
My Rating/Review
Log in to submit Rating and Review.