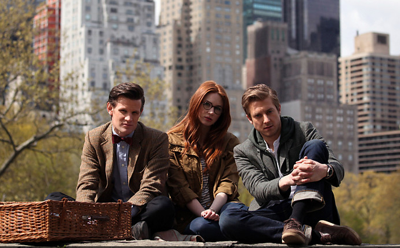 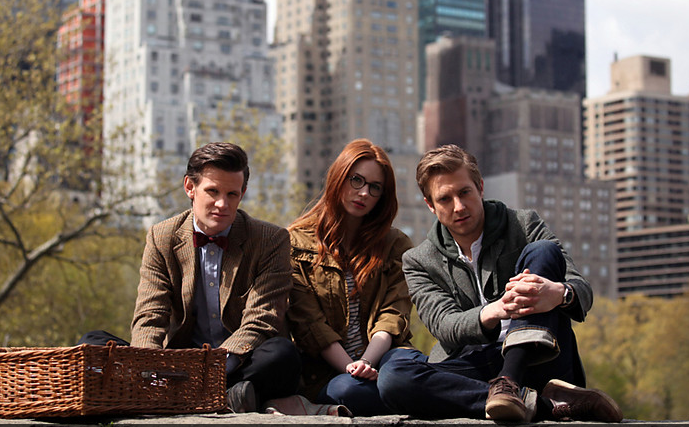 The cold open takes place in 1930s Manhattan, where private detective Sam Garner is hired by Mr. Grayle to investigate "moving statues" at the Winter Quay, a set of apartment blocks. There, Garner finds an elderly version of himself dying in a bed and is chased by Weeping Angels to the rooftop, where he is confronted by a grimacing Statue of Liberty. In 2012, the Doctor, Amy, and Rory enjoy a picnic in Central Park. The Doctor is reading a pulp novel to Amy about a detective named Melody Malone when Rory leaves them to get coffee. Tearing out the last page because he "hates endings", the Doctor continues to read and finds that Rory turns up in the novel. Rory, meanwhile, has been sent back in time to the 1930s by a cherub Weeping Angel and meets his daughter River Song, who he realizes had been the character of Melody Malone in the book. The two are abducted by Grayle's henchmen, and River tells Rory that New York is subject to unusual time distortions that prevent the Doctor's time machine the TARDIS from landing. When the Doctor and Amy attempt to travel to that time, they find themselves back in 2012 in a graveyard.

Grayle locks Rory in his dark basement with cherub Angels and only a box of matches to protect him, while River is taken to his office. The Doctor and River find a way to communicate and set up a homing beacon allowing the Doctor to land the TARDIS. In the meantime Grayle allows a damaged Weeping Angel to grab River's wrist so he can interrogate her about the Angels. Deducing that River will write the book, Amy identifies Rory's location using the chapter titles and the Doctor sends her to rescue him, but they find that he has disappeared. The Doctor, meanwhile, is upset at reading the final chapter title in the novel ? "Amelia's Last Farewell". In an attempt to change the future, he orders River to free herself from the Angel without breaking her wrist, as Amy had read from the book which made it the inevitable future. River apparently frees herself unharmed and locates Rory nearby at Winter Quay: he has been moved in space but not time. However, the Doctor discovers that River did break her wrist, and he uses his regeneration energy to heal it.

At Winter Quay, Rory is drawn to an apartment labelled with his name just as the Doctor, Amy, and River arrive. Inside, an elderly Rory is lying on a bed and calls Amy over before dying. The Doctor suggests that the Quay has been used by the Angels many times as a battery farm, leaving their victims to live out their lives in solitude while feeding on their energy. Rory and Amy refuse to accept their fate, insisting they can run from the Angels forever. The Doctor and River agree and help to distract the Angels and Amy and Rory make it to the roof, where the Statue of Liberty, now revealed to be an Angel, awaits. Rory suggests there is another exit; were he to die by jumping from the roof, a paradox would be created and wipe the Angels from existence. Rather than pushing him as he requests, Amy joins him, and the two jump just as the Doctor and River reach the roof.

The four find themselves back in the modern-day New York graveyard again. As they are about to leave, Rory spots a tombstone with his name on it and moments after he is touched by a surviving Angel and disappears into the past. A distraught Amy convinces herself that if she were touched by the same Angel, it would send her to the same time it sent Rory. The Doctor desperately tries to talk her out of it, knowing that due to the paradox previously created he cannot return to the past to see her again, but River insists she go. Amy says goodbye and allows the Angel to touch her, leaving the Doctor devastated at her departure. The tombstone changes to reflect Amy's presence in the past with Rory, both having died at an old age. In the TARDIS, the Doctor asks River to travel with him; she agrees, but "not all the time". River tells him that Amy would be the one to publish the book she writes, and she will send it to her and ask her to write an afterword for the Doctor. Realising, he races back to their picnic spot and retrieves the page he tore out earlier, which contains the afterword. In it, Amy tells him that she and Rory love him and assures him that they lived a good and happy life together. She also suggests that he pay a visit to her younger self to reassure her that he will come back for her and take her on amazing journeys. The Doctor is briefly shown dashing around the TARDIS controls. The episode ends with a young Amelia Pond sitting in her back garden, then looking up and smiling as the TARDIS engines are heard.