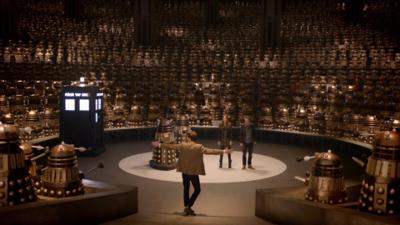 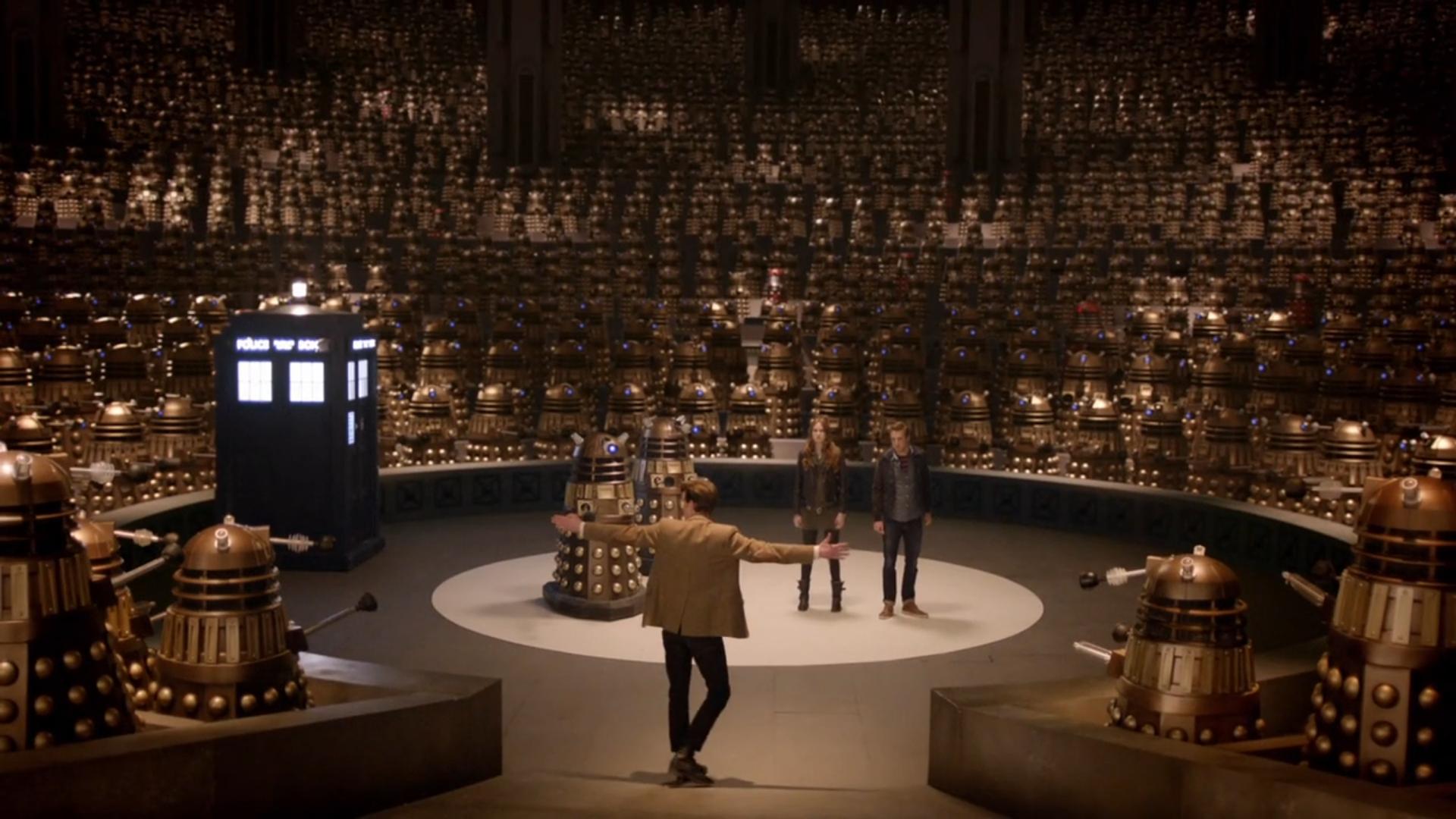 The Doctor is lured to the ruins of Skaro, original homeworld of the Daleks, by a humanoid Dalek "puppet", Darla, who teleports him to the Parliament of the Daleks. There he is reunited with Amy and Rory, who have been similarly kidnapped from present-day Earth, just after Rory has delivered Amy their divorce papers. The Dalek Prime Minister explains that the Daleks have a planet known as the Asylum, where they keep battle-scarred Daleks that have gone insane. The Daleks are unwilling to kill these insane Daleks, as destroying such pure hatred would contravene their sense of "beauty", much to the Doctor's revulsion. The Parliament has received a transmission of the Habanera Aria from the heart of the asylum. The Doctor makes contact with the source of the transmission ? a woman named Oswin Oswald, who states that she was Junior Entertainment Manager on the starliner Alaska, which crashed into the Asylum. Oswin claims to have been fending off Dalek attacks for a year, occupying herself by making souffles, which intrigues the Doctor as he wonders where she got the milk. The crash ruptured the planet's force-field, thus risking escape of the planet's inmates. To prevent this, the Parliament now wishes to destroy the planet remotely, but the force-field isn't ruptured sufficiently to allow that. The force-field can only be deactivated from the planet itself, but afraid to face such a mission themselves, the Daleks of the Parliament task the Doctor, Amy and Rory with doing so.

The three are given bracelets to protect them from the planet's nanogene cloud, which would convert them into Dalek puppets to serve the facility's security systems, before being dropped through the force-field breach via a gravity tunnel onto the surface of the planet. The Doctor and Amy land close to each other, and are discovered by Harvey, another survivor from the Alaska. Rory, however, is dropped to the bottom of a long shaft into the Asylum. There he accidentally awakens some of its inhabitants, but is guided to a safe room by Oswin, who has accessed the computers. Meanwhile Harvey guides the Doctor and Amy to his Alaska escape pod, where Harvey attacks them after being revealed as a Dalek puppet, converted by the nanogene cloud. A similar fate has befallen the corpses of other Alaska survivors, who re-animate and attack the Doctor and Amy, stealing Amy's nano-field bracelet just before the pair are saved by Oswin and guided to Rory through a hatch in the bottom of the pod. Now unprotected from the nanogenes, Amy begins to be converted, experiencing memory loss and hallucinations.

The Doctor guesses that the Daleks will destroy the planet as soon as he deactivates the force-field, but he realises that Rory's hideout is a telepad, via which they can teleport onto the Dalek Parliament ship. Oswin agrees to deactivate the force-field in return for the Doctor coming to save her. While the Doctor is gone, Rory tries to give Amy his bracelet. The Doctor had stated that love slows the Dalek puppet conversion, so Rory argues that he would be converted more slowly because he has always loved Amy more than she loves him, referring his 2000-year vigil in "The Big Bang". Amy angrily replies that she loves him equally, but gave him up since she is infertile as a result of the events of "A Good Man Goes to War", and thus unable to bear the children she knows that he has always desired. They realise that the Doctor had secretly slipped his bracelet onto her without telling them, to possibly get them to discuss their feelings.

The Doctor makes his way to Oswin, venturing through the "intensive care section", which holds Daleks who survived encounters with him. They begin to re-activate, but he is saved by Oswin, who deletes the Doctor from the Daleks' collective telepathically-shared knowledge, leaving them with no memory of him. The Doctor enters Oswin's chamber, only to discover to his horror that she is a Dalek. Oswin had been captured by Daleks after reaching the asylum through the same hatch used by the Doctor and Amy, and, to preserve her genius-level intellect for Dalek use, was turned into a Dalek cyborg rather than a standard puppet. Unable to cope with her conversion, her mind retreated into a fantasy of survival as a human. Oswin is nearly overcome by her Dalek personality at this revelation, though she still possesses human emotions and is unable to kill the Doctor. Her confrontation causes the Doctor to reflect that the Daleks' many achievements ? including their parliamentary discourse and newfound diversity ? have been developed in fearful response to his threat to their existence. Oswin fulfils her promise of deactivating the force-field, making her final request that the Doctor remember her as the human she once was.

The Doctor returns to Amy and Rory, and they teleport back to the TARDIS before the planet is destroyed. The Daleks fail to recognise the Doctor due to his removal from their hive intelligence. He jubilantly leaves the ship, and drops the reunited Amy and Rory back home. He then departs alone, delighting in the Dalek Parliament's closing question to him: "Doctor Who?".