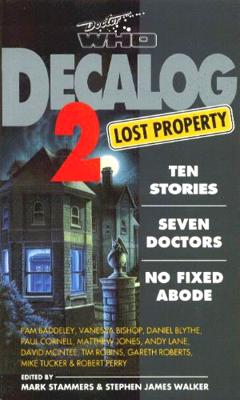 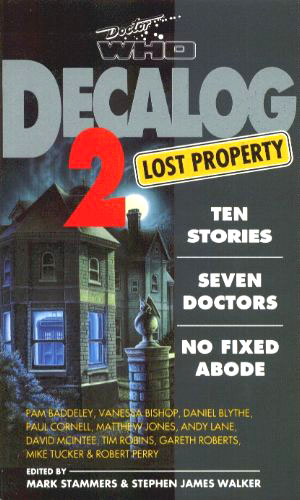 Decalog 2: Lost Property was the second volume in the Decalog short story series. It was edited by Mark Stammers and Stephen James Walker.

Imaginatively entitled Decalog 2, this is the second collection of Doctor Who short fiction. And this time the theme is the Doctor's home - inasmuch as a peripatetic Time Lord can be said to have a home.

As before, the editors have gathered a galaxy of star writers to illuminate the theme. Many of the contributors will be well known to readers of the New Adventures and the Virgin Missing Adventures series of novels: Daniel Blythe, Paul Cornell, Andy Lane, David McIntee and Gareth Roberts are prolific Doctor Who authors. And as before this volume also includes contributions from new writers.

In these stories, among many other unexpected occurrences, the Doctor meets a pretender to the English throne, Nyssa meets a ghost, Zoe gets lost in time, Brigadier Lethbridge-Stewart is dismissed from UNIT, and K9 is in electrifying form. And the Kandy Man is on Tara in a verse play in iambic pentameter.