< The Happiness Patrol
The Secret in Vault 13 >

Daleks: Mission to the Unknown 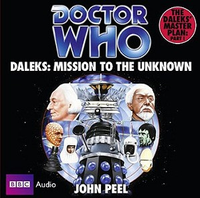 Mission to the Unknown was the second serial of season 3 of Doctor Who. It is the only Doctor Who story to not feature the Doctor, his companions or the TARDIS and was also notable for being the only one-part serial in the classic era.

No video footage of this story survives.

The audio recording of the episode, with added narration by Peter Purves, was made available on CD as part of The Daleks' Master Plan, first released by the BBC Radio Collection in October 2001.

The audio of the episode was offered as part of a promotional giveaway free by the Daily Telegraph in 2010.

The audio was included again as part of The Daleks' Master Plan in the CD box set Doctor Who: The Lost TV Episodes - Collection Two: 1965-1966.