< The Greatest Show in the Galaxy
The Happiness Patrol >

Doctor Who and the Dalek Invasion of Earth 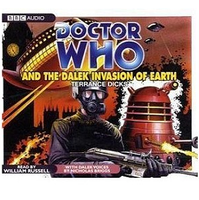 Doctor Who and the Dalek Invasion of Earth: A Classic Doctor Who Novel
Audio CD Audiobook, CD, Unabridged

The TARDIS lands in a London of future timesa city of devastation now ruled by Daleks. A perilous journey through England finally brings them to the center of Dalek operations...and the reason for the Dalek invasion of Earth! William Russell, who played the Doctor's companion Ian in the original TV serial, reads this unabridged novel, with Dalek voices by Nicholas Briggs.