< The Three Doctors
Doctor Who and the Space War > 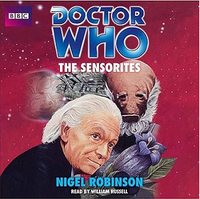 The Second Alien Worlds Collection was a box set collecting four Target novelisation readings and the 2012 audio novelisation of The Androids of Tara specially produced for AudioGO. Released 2018.

In The Sensorites, the First Doctor is forced into an uneasy alliance with a race of telepathic creatures from the Sense-Sphere.

In Doctor Who and the Space War, the Third Doctor finds that a full-scale war between Earth and the planet Draconia seems inevitable.

In Doctor Who and the Planet of the Daleks, the Third Doctor and Jo discover a vast army of Daleks waiting to mobilise and conquer on the planet Spiridon.

In Doctor Who and the Ribos Operation, the Fourth Doctor, Romana and K9 embark on a quest for the first missing segment of the Key to Time.

In The Androids of Tara they become entangled in the politics of a planet on which androids are a vital commodity.