< Doctor Who and the Invasion from Space 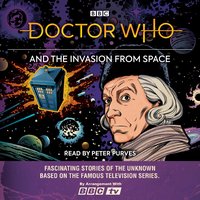 "Purves does a great job not just creating this off-kilter version of Hartnell’s Doctor but also those around him in this story." scifibulletin.com

First published as an illustrated book in the 1960s and now a collector’s item, Doctor Who and the Invasion from Space sees the Doctor land in the futuristic world of The One. Along with the Mortimer family, whom he rescued from the Great Fire of London, he finds himself recruited to lead a galactic invasion from Andromeda with the TARDIS instrumental in the plan!

In Ten Fathom Pirates, a story from The Doctor Who Annual 1967, the Doctor encounters underwater raiders on a distant planet. Forced to accompany them on a mission to find parts for the TARDIS, he must use all his wits and ingenuity if he is ever to escape their company.

Peter Purves, who played the First Doctor’s companion Steven Taylor in the BBC TV series, reads two stories brimming with the charm and naivety of a bygone age.

World Distributors' Doctor Who Annuals were originally published from 1965 to 1986, a highlight of the year for fans of the programme, featuring text stories and comic strips based on the TV series.