< Dr. Who and the Daleks
Dalekmania : The History of the Daleks on the Big Screen > 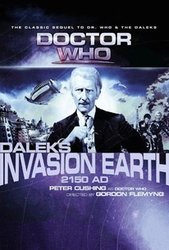 Daleks' Invasion Earth 2150 A.D. is a 1966 British science fiction film directed by Gordon Flemyng and written by Milton Subotsky, and the second of two films based on the British science-fiction television series Doctor Who. It stars Peter Cushing in a return to the role of the eccentric inventor and time traveller Dr. Who, Roberta Tovey as Susan, Jill Curzon as Louise and Bernard Cribbins as Tom Campbell. It is the sequel to Dr. Who and the Daleks (1965).

The story is based on the Doctor Who television serial The Dalek Invasion of Earth (1964), produced by the BBC. The film was not intended to form part of the ongoing storylines of the television series. Elements from the programme are used, however, such as various characters, the Daleks and a police box time machine, albeit in re-imagined forms.