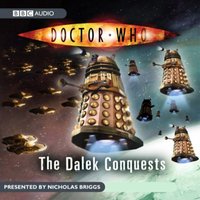 The Dalek Conquests is a BBC Radio-produced retrospective on the Daleks from their first appearance in TV: The Daleks in 1963 to their (then) most recent appearance in the television story The Parting of the Ways in 2005. It was released by BBC Audio as a 2-CD set in 2006, with a running time of approximately 2 hours, 35 minutes.

The documentary is narrated by Nicholas Briggs with audio clips taken from every televised Dalek story in both the classic and revived series (except for incidental references and the 1996 TV movie) up to the end of the 2005 season, which are used to summarise the events of the various stories (this includes audio taken from several stories, including Mission to the Unknown, which do not exist in complete film/video form in the BBC Archives (although most of the soundtracks have been released by BBC Radio and BBC Audio in the past)).

The documentary is presented in a partly in-universe style, as if the BBC have sent a crew to investigate Henry van Statten's now-sealed facility in Utah, the Vault, at some point after the year 2012. The fiction of the production holds that the BBC is also aware of such events as the Last Great Time War, the Doctor's ability to regenerate, etc.

The Daleks have a long and terrible history of aggression, and are among the most feared of all science fiction monsters. Ruthless, cunning, and utterly evil, they have no pity, no fear, and will stop at nothing to destroy all other forms of life. Now Nicholas Briggs - the voice of the Daleks in the BBC's Doctor Who TV series goes deep underground to a deserted base in Utah to unearth the truth about the most nightmarish creatures in the universe. Packed with extracts from the Daleks' many TV appearances, The Dalek Conquests finds out where they come from, why they are bent on universal domination, and what part they played in the Time Wars. Above, all it explores their epic struggles with their nemesis, the Time Lord known as the Doctor.

Featuring clips from such classic stories as The Dalek Invasion of Earth, Day of the Daleks, The Planet of the Daleks [sic], Genesis of the Daleks, and the 2005 episodes Dalek and The Parting of the Ways, this CD pieces together the mysterious jigsaw that is the history of the Daleks.

This is essential listening for Dalek fans and foes new and old.