< Scream of the Shalka
The Eleventh Tiger > 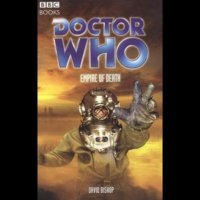 In 1856, a boy discovers he can speak with the voices of the dead. He grows up to become one of England's most celebrated spiritualists.

In 1863 the British Empire is effectively without a leader. Queen Victoria is inconsolable with grief following the death of her beloved husband, Prince Albert. The monarch's last hope is a secret séance.

The Doctor and Nyssa are also coming to terms with loss following the death of Adric and Tegan's sudden departure. Trying to visit the Great Exhibition of 1851, the time travellers are shocked when a ghost appears in the TARDIS, beckoning them to the Other Side.

What is hidden in a drowned valley guarded by the British Army? Is there life after death and can it be reached by those still alive? And why is the Doctor so terrified of facing his own ghosts?

Plot
NR
(?)
Acting
NR
(?)
Effects
NR
(?)
Replay
NR
(?)
5th Doctor
Nyssa
The Creatures on the Other Side
Writer:
David Bishop
Reviews
My Rating/Review
Log in to submit Rating and Review.