The Colony of Lies 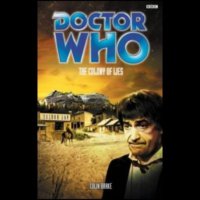 According to popular legend, the great humanitarian Stewart Ransom founded the Independent Earth Colony on Axista Four in the year 2439, but the truth is not as neat and simple as the legend would suggest...

The year is 2539. Arriving on Axista Four, the Doctor, Zoe and Jamie find the colony in a state of chaos. A breakaway group of colonists — the "Realists" — has abandoned Ransom's Back to Basics ideals and is creating a new high-tech settlement. The "Loyalists" who remain are dwindling in number and face total extinction.

Meanwhile, a spaceship from Earth has arrived with news that 80,000 refugees are about to descend upon the planet; the Realists are staging raids on the wreck of the colony ship, and in a secret underground bunker mysterious aliens who claim to be the planet's first colonists are beginning to awake.

Who are the dog-like aliens who call themselves Tyrenians? What is the secret agenda of the sinister Federation Administrator Greene? And what really happened when the colony ship crash-landed on Axista Four 100 years ago?