< Shadow in the Glass
Superior Beings > 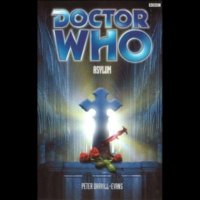 "My view," said the Fourth Doctor, "is that you can run — in fact it's often by far the best option — but you can't hide. I'll see myself out."

Nyssa felt a pang of disappointment. He had gone. She would probably never see him again.

The town of Oxford in AD 1278 seems a haven of tranquillity. Under the summer sun, merchants, students and clerics go about their daily, unhurried tasks. Alfric, the proctor of the Franciscan friary, has only two minor problems: one of the friars has gone missing, and there's a travelling showman, calling himself the Doctor, with a pretty young noblewoman by his side, attracting crowds in the narrow streets.

When the missing friar is found dead, the Doctor is convinced he has been murdered. There is a ruthless killer at large, and Alfric reluctantly teams up with the Doctor to track him down.

Their investigation leads towards the most celebrated of the Franciscan brotherhood: Roger Bacon, famed throughout Christendom as a scholar — and, in the far future, the subject of a revolutionary thesis by technographer Nyssa of Traken.