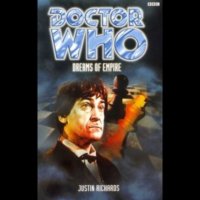 The history books were clear: the once-proud Haddron Empire, fatally weakened by civil war, was finally brought to its knees by a catastrophic explosion. But, then again, history books can lie...

Landing in what seems to be a medieval castle, the Doctor and his friends discover that the final act of a drama that has torn apart a stellar empire is being played out around them.

Who is the man behind the mask, and how are his chess games linked to life and death in his fortress prison? What is the secret of the suits of armour which line the banqueting hall? Who is on the battle cruiser that is getting closer all the time, and what will they want when they finally arrive?

The pieces are all in place, and the TARDIS crew soon find themselves under siege. With both deadly robot troops and human traitors to defeat, it seems the future of the entire empire hangs in the balance...