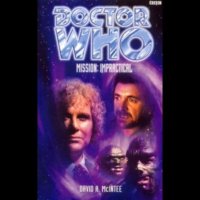 When daring criminal Jack Chance masterminds the heist of a precious national treasure from the planet Veltroch, it is the first step in a chain of events that could lead to the destruction of two civilisations...

Pursued by bounty hunters, the Sixth Doctor and his shapeshifting companion Frobisher run into old acquaintances Glitz and Dibber — notorious rogues who have become involved in something big: a covert government agency on Vandor Prime is forcing the pair to turn their criminal talents to its own ends.

The Doctor and Frobisher are soon drawn into the mysterious scheme themselves — but what game is truly being played by the authorities? How is the group of Ogron raiders involved? And who is so desperate to see the Doctor dead?

Caught in a web of deceit and pursued by ruthless killers, the Doctor's mission — should he decide to accept it — is to join Glitz's gang and pull off the crime of the century. And failure will result in an interstellar war costing the lives of millions...