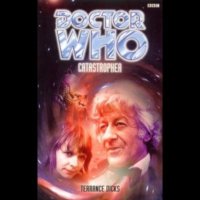 "Look at the way they just call themselves the People," said Jo. "They're too humble to give themselves a name!" '"Or too arrogant to think they need one," said the Doctor.

The planet's real name is Kastopheria, but generally it's been rechristened Catastrophea — it's a catastrophe waiting to happen. Supposedly civilised races are exploiting the world, squabbling over its wealth and resources, while the indigenous population — golden-skinned giants — seem not to care what their own fate might be. The Doctor and Jo soon become embroiled in a plan to keep peace between different parties vying for control over the planet.

But what is the strange glowing crystal lying hidden in impenetrable jungle? How will the arrival of the proud, warlike Draconians affect the fragile peace? In his quest to find the truth behind the secret history of the People, the Doctor risks unleashing a force more terrible than the galaxy has known for aeons...