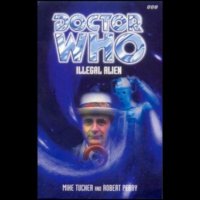 Britain is at war. Night after night the Luftwaffe are bombing London. A serial killer dubbed the Limehouse Lurker is stalking the rubble-strewn streets. But a deadlier threat falls from the sky in the shape of a sinister silver sphere...

Cody McBride, ex-pat American private eye, sees the sphere crash-land and split open — and glimpses something emerging from within. But the military dismiss his account of events — the sphere is simply a new German secret weapon that has malfunctioned in some way. What else could it be?

Arriving amid the chaos, the Doctor and Ace are the only people to believe McBride. The sphere bears all the hallmarks of sophisticated alien technology — and whatever was inside it is now loose in London.

Before long, they have embarked on a trail that brings them face to face with hidden Nazi operatives — and some very old enemies...