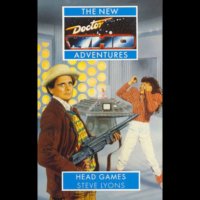 "This isn't Hell," the Doctor assured her. "It's only a sequel."

Stand by for an exciting new adventure with Dr Who and his companion, Jason. Once again, our time-hopping friends set out to seek injustice, raise rebel armies, overthrow dictators and beat up green monsters.

But this time, Dr Who faces a deadly new threat: a genocidal rogue Time Lord and his army of combat-hardened, gun-slinging warrior women. To make matters worse, this foe is a twisted version of the good Doctor himself — and if Dr Who and Jason can't stop him, he'll end all life on Detrios and Earth.

Armed only with their wits and with the modest power of control over reality, our heroes must face Dr Who's evil double: the megalomaniac scientist who calls himself simply... "the Doctor".