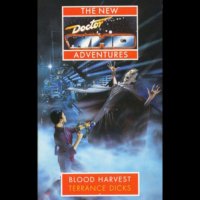 "Doc's peddling bootleg liquor in an illegal speakeasy. You’re carrying a gun for him, Ace - which makes you no better than any other gun-moll."
Dekker is a private eye, an honest one. But when Al Capone hires him to investigate a new joint called "Doc's", he knows this is one job he can't refuse. And just why are the Doctor and Ace selling illegal booze in a town full of murderous gangsters?

Meanwhile, Bernice has been abandoned on a vampire-infested planet outside normal space. There she meets a mysterious stranger called Romanadvoratrelundar — and discovers an ancient and malevolent power, linking 1929 Chicago with a lair of immortal evil.

The consequences of this story are inextricably linked to events in the Doctor’s past.