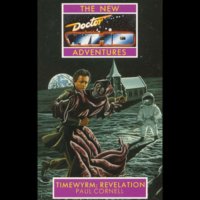 The parishioners of Cheldon Bonniface walk to church on the Sunday before Christmas, 1992. Snow is in the air, or is it the threat of something else? The Reverend Trelaw has a premonition, too, and discusses it with the spirit that inhabits his church. Perhaps the Doctor is about to visit them again?

Some years earlier, in a playground in Perivale, Chad Boyle picks up a half-brick. He's going to get that creepy Dorothy who says she wants to be an astronaut. The weapon falls, splitting Dorothy's skull. She dies instantly.

The Doctor has pursued the Timewyrm from prehistoric Mesopotamia to Nazi Germany, and then to the end of the universe. He has tracked down the creature again: but what trans-temporal trap has the Timewyrm prepared for their final confrontation?