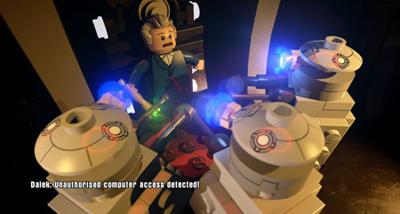 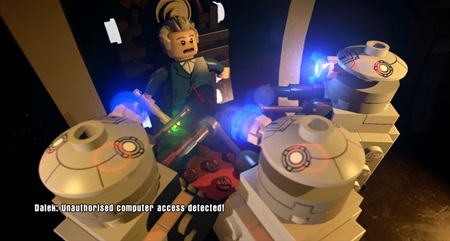 It follows the toys-to-life format, in that the player has LEGO minifigures and a toy pad that can be played within the game itself where it features characters and environments from over 30 different franchises, including Doctor Who, Harry Potter, The Wizard of Oz, The Simpsons, DC Comics, Back to the Future, The Lord of the Rings, Ghostbusters, and Scooby-Doo. Characters joined forces on an adventure through different "worlds" based upon the franchises.

The base game included Batman from DC Comics, Gandalf from The Lord of the Rings, and Wyldstyle from The LEGO Movie. Players could optionally purchase additional expansion packs adding other playable characters from the different franchises, including the Doctor and other characters from Doctor Who.

On 23 October 2017, slightly over two years after its initial release, the official LEGO Dimensions Twitter account confirmed that the game was being discontinued and that, while the official game servers would remain active and existing packs would continue to be available for purchase, no additional packs would be released.[1]

The main game has a Doctor Who-based level, with an appearance by the Twelfth Doctor and a cameo appearance by Clara Oswald. The Daleks and other Doctor Who monsters also appeared in this level.

Two expansion packs were released. The first, a "Level Pack", released on 3 November 2015,[2] included the Twelfth Doctor, K9, and the Doctor's TARDIS, as well as an exclusive bonus level, The Dalek Extermination of Earth. With the first pack, the player had the ability to play as the different incarnations of the Doctor and access the Doctor Who World area, as well as accessing several secret Doctor Who-themed levels within the main game. The second pack, a "Fun Pack", released on 19 January 2016,[3] featured a Cyberman and a Dalek. The Doctor and Cyberman were actual playable characters; K9, the TARDIS and the Dalek were considered vehicles. Unique of all other vehicles available for the game, the TARDIS was the only one with an explorable interior in which studs (the game's main currency equivalent, needed to complete certain tasks and to call upon characters not owned by the player to solve puzzles) could be collected.

It was possible to play the game through without possessing the Doctor. Several puzzles requiring his expertise could be solved using other optional characters or using "Hire a Hero" in which the Doctor, for a fee, could briefly be brought in to solve the puzzle. Several secret levels within the game, however, could only be accessed using the TARDIS.