< The Armageddon Factor
City of Death >

Destiny of the Daleks 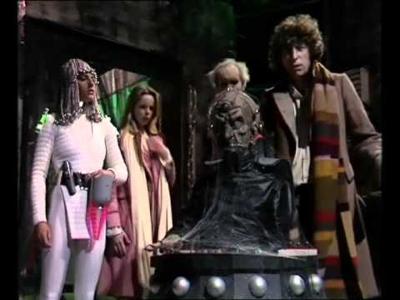 The Doctor and a newly-regenerated Romana arrive on Skaro and discover that the Daleks are using explosive charges and a group of humanoid slave workers to mine the planet in search of their creator, Davros. A stalemate has arisen in an interplanetary war that the Daleks are waging against the robotic Movellans, and their hope is that Davros will be able to give them the edge.

A force of Movellans has also arrived on Skaro, determined to thwart the Daleks' plan. Davros is found in the ruins of the old Kaled city and immediately revives, his life support systems having held him in suspended animation ever since his apparent death. He quickly deduces that the battle computers of the two warring races are locked in a logical stalemate and that he can break this by introducing an element of intuition.

The Movellans, having reached the same conclusion, want the Doctor to do likewise for them. Davros attempts to destroy the Movellan ship using a suicide squad of Daleks loaded with bombs, but the Doctor returns to the Kaled city and tricks him into inadvertently detonating them before they reach their target.

The Movellans are deactivated and Davros is cryogenically frozen on board their ship until the freed slave workers can take him to Earth and ensure that he is put on trial for his crimes.