< Frontier In Space
The Green Death >

Planet of the Daleks 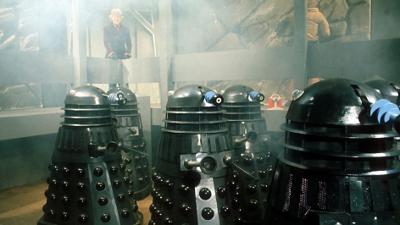 The TARDIS materialises in a hostile jungle on the planet Spiridon. Jo sets out alone to find help for the Doctor, who has fallen into a coma. She meets a party of Thals and is left in hiding aboard their crashed spaceship while they go to the Doctor's aid. The Time Lord, now recovered, learns of their mission to destroy a party of Daleks sent here to discover the native Spiridons' secret of invisibility.

Another Thal spaceship crash-lands in the jungle, and the survivors bring news that somewhere on Spiridon there is an army of ten thousand Daleks. Jo meanwhile meets a friendly Spiridon named Wester, who cures a deadly fungus disease that she has contracted.

It transpires that the Daleks' army is frozen in suspended animation in a cavern below their base. The Doctor, with the help of the Thals, explodes a bomb in the cavern wall and thereby causes one of the planet's natural ice volcanoes to erupt, entombing the army in a torrent of liquid ice.

The newly-arrived Dalek Supreme and his aides are left stranded on Spiridon as the Thals steal their ship and the Doctor and Jo depart in the TARDIS.