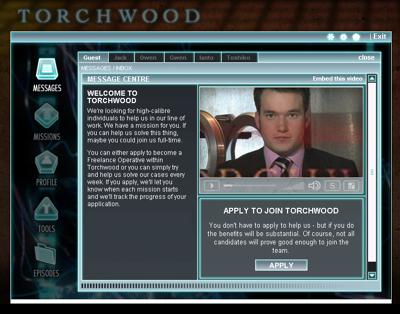 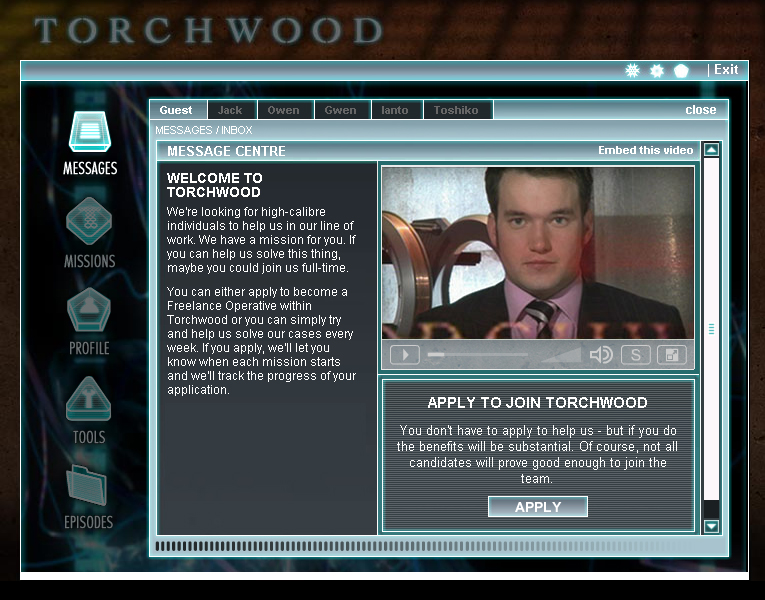 The Torchwood Mission Game was an eleven-week-long investigation game on the Torchwood website. The game tied in with the second series of Torchwood. It is no longer hosted by the BBC website.

The player was put into the guise of a Torchwood recruit and briefed on mission events each week by Ianto Jones. Each mission involved a piece of information needed by the Torchwood team, which the player would have to find and report back to Ianto.

The player had access to a Torchwood computer desktop. With the tools available, as well as information from "external" websites (actually run by the BBC as part of the game), the player would have to figure out the information Ianto required. The player was also encouraged to listen to Dark Talk, a "pirate radio show" which was tied into the game's narrative while also referencing the events in the Torchwood universe that week.

The player received video messages from the Torchwood team with mission briefings and hints. The Torchwood computer also contained the Torchwood team's email messages to one another which, while largely unrelated to the game, tied into events in the concurrent television episodes.

During Series 2's original broadcast, players could register on the site to track their progress and receive emails from Torchwood when the next mission was ready. After the series' end this function was disabled, but all missions of the game remained playable.