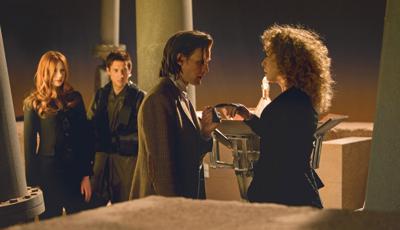 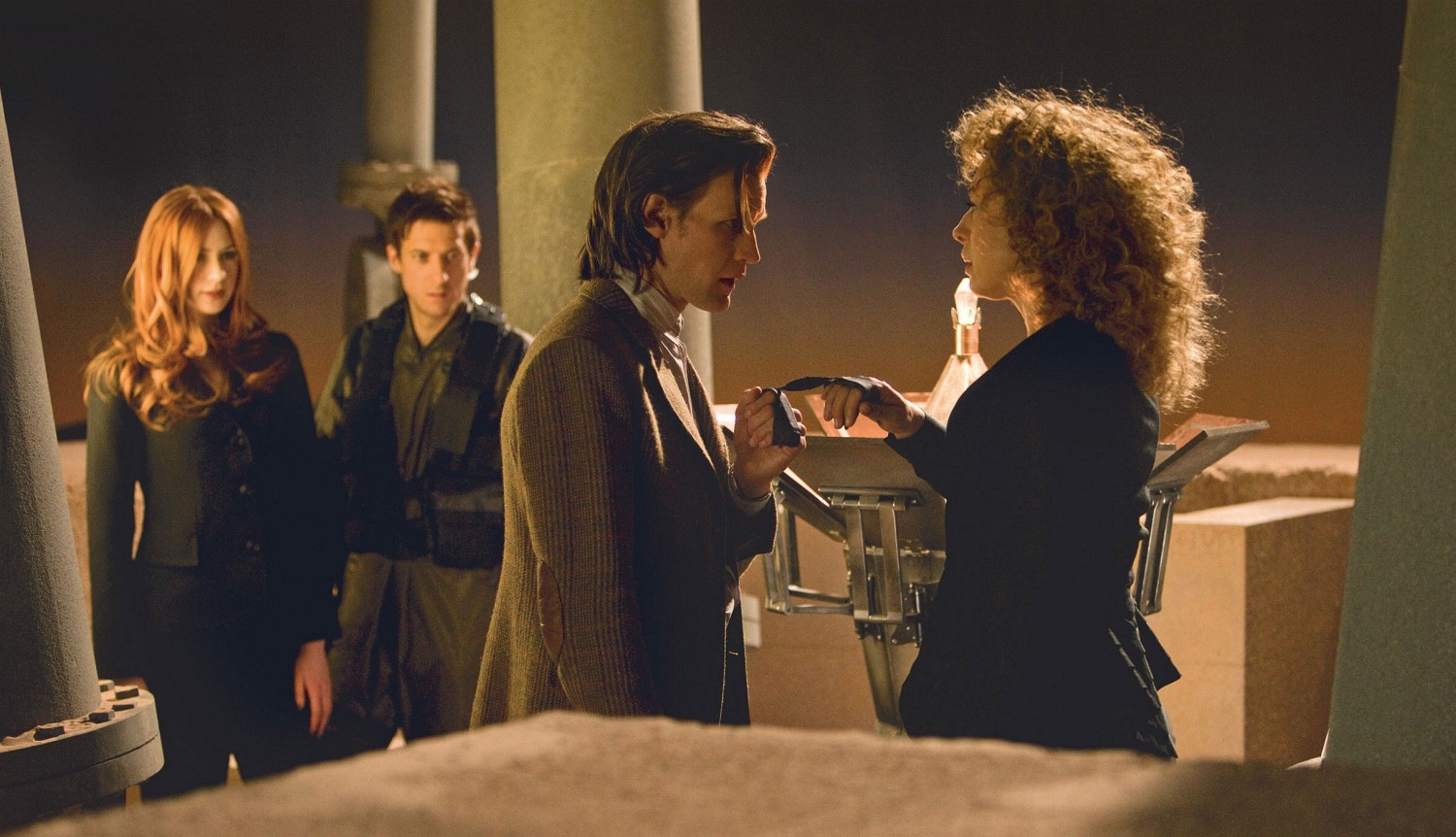 The Doctor, aware of his imminent death at the fixed point of time on 22 April 2011 at Lake Silencio in Utah, attempts to track down the Silence to learn why he must die. He encounters the Teselecta shapeshifting robot and its miniaturised crew who are currently posing as one of the members of the Silence; they offer him any help within their power as he faces his death. Through them, the Doctor is led to the living head of Dorium Maldovar, one of the Doctor's allies taken by the Order of the Headless Monks ("A Good Man Goes to War"). Dorium reveals that the Silence are dedicated to averting the Doctor's future, warning him that "On the fields of Trenzelor, at the fall of the Eleventh, when no living creature can speak falsely or fail to answer a question will be asked?one that must never be answered. And Silence must fall when the question is asked." The Doctor continues to refuse to go to Lake Silencio until he discovers his old friend Brigadier Lethbridge-Stewart has died, at which point he accepts his fate. To avoid crossing his own time stream, he gives the Teselecta crew the invitations to Lake Silencio for Amy, Rory, River Song, Canton Everett Delaware III, and a younger version of himself.

As shown in "The Impossible Astronaut", the Doctor joins his friends at Lake Silencio and then approaches the astronaut, now known to be a younger version of River Song, Amy and Rory's daughter, trained to kill the Doctor by the Silence and Madame Kovarian. River does not want to kill him but is unable to fight the suit's control, and the Doctor says he forgives her and reminds her that the event is inevitable. River, despite his warning against interfering with a fixed point, surprises the Doctor by draining the astronaut suit's weapons systems and averting his death. Time becomes "stuck" as a result and begins to disintegrate; all of Earth's history begins to run simultaneously at a fixed moment of 5:02 p.m. on 22 April 2011. In London, Holy Roman Emperor Winston Churchill takes the Doctor, his "soothsayer", out from his locked cell to ask him about the condition of time. The Doctor explains the preceding events, but that tally marks are appearing on his arms, indicating the presence of the Silence. After observing a Silence nest overhead, they are rescued by Amy and a squad of soldiers under her command. Due to the effects of the crack in her bedroom, Amy is cognisant of the altered timeline, though she is unaware that her trusted captain is Rory. Amy takes the Doctor to "Area 52", a hollowed-out Giza pyramid, where they have captured over a hundred Silence and Madame Kovarian. River is also there, aware of the consequences of her actions refusing to allow the Doctor to touch her, an event that would "unstick" time and allow it to resume. They all wear "eyedrives", external memory eye patches which enable them to avoid the Silence's effect of erasing themselves from memory.

They realise that this was a trap arranged by Kovarian, as the Silence begin to escape confinement and overload the eyedrives, incapacitating their users. The Doctor and River escape to the top of the pyramid while Amy and Rory fight off a wave of Silence and Amy realises who Rory is. Madame Kovarian dislodges her own eyedrive as it begins to overload, but Amy forces it back in place with the intention of killing her as revenge for Kovarian taking her child away. Amy and Rory regroup with River and the Doctor. River tries to convince the Doctor that this frozen timeline is acceptable and that he does not have to die, but the Doctor explains that all of reality will soon break down. The Doctor marries River on the spot and whispers something in her ear, declaring that he had just told her his name. He then requests that River allow him to prevent the universe's destruction. The two kiss, and reality begins to return to normal.

Some time later, Amy and Rory are visited by River, shortly after the events of "Flesh and Stone" in River's timeline. When Amy explains that she had recently witnessed the Doctor's death, River reveals that the Doctor lied when he said he told her his name; instead he had said "Look into my eye". The Doctor had asked the Teselecta to masquerade as him at Lake Silencio, and the Doctor and his TARDIS had been miniaturised within it. Elsewhere, the Doctor takes Dorium's head back to where it was stored and explains that his perceived death will enable him to be forgotten as he had been getting "too big". As the Doctor leaves, Dorium warns of the prophecies that still await him and the question which Dorium calls out after him: "Doctor who?"